Like many small ‘l’ liberals, I experienced the early hours after the US election as an existential blitzkrieg.

A candidate who had no experience in public service, zero respect for the core tenets of democracy, made blatant appeals to sexism and racism throughout his campaign and had bragged about not paying his taxes, had mustered sufficient numbers of voters on November 8 2016 to win the United States Presidency.

In those first fragile days, my fellow political nerds and I pored over the exit polls in search of answers, the way a clairvoyant scrutinizes tealeaves to read the future. Whether your source was CNN, The New York Times or one of the fee for service polling houses, the same outlier pattern emerged.

As you can see in Figure 1 below, this is six times the ‘education gap’ previously observed.

Figure 1: Percent of two-party vote for the Republican presidential candidate among whites with and without a college degree, 1980-2016

The flight of the white working class to Trump became the story. And from that news story, two political narratives were born.

The first was a tale of working class angst and goes something like this: the Liberal elites have lost touch with the ordinary working people and have become an ivory tower establishment beholden to business interest and special interests. Hillary Clinton spent all her time campaigning on the aforementioned ‘special interest’ issues, such as gay marriage, women’s reproductive rights, gun control, black incarceration and climate change. She had ignored the real economic issues facing ordinary Americans. Feeling that the Democrats could no longer be counted upon to champion the concept of ‘a fair day’s wage for a fair day’s work,’ the white working classes had abandoned a party that no longer gave a damn about them.

This position was given significant amplification on November 14, when Bernie Sanders appeared on CBS This Morning to indict the Democratic ‘establishment:’

“There needs to be a profound change in the way the Democratic Party does business. It is not good enough to have a liberal elite.”

“I come from the white working class and I am deeply humiliated that the Democratic Party can’t talk to the people where I came from.”

The proponents of the above narrative have taken his call deeply to heart. In the two months since the election, the clamour for a back-to-basics working class platform from the hard left has only intensified.

It is worth noting at this juncture, that Sanders himself has been as much a vocal advocate of progressive social policies as he has been for strong social democracy. The narrative that he has come to embody is not necessarily representative of the man.

The countervailing narrative is this: the impact of sexist and racist sentiment as driving forces in this election cannot be downplayed. To ignore this fact is to run the risk of further fragmentation of a society already struggling to adjust to waves of demographic and social change.

For the first time in American history, many whites, particularly those without a college education, see themselves as an embattled group. They resent the fact that in a short space of time, the status of minorities and the role of women has shifted dramatically. The simultaneous loss of white privilege and economic security has led to an increasing insularity and nostalgia for the past. Coming off the back of America’s first black President, the prospect of America’s first female President was too much to bear.

Put another way, non-college educated whites didn’t turn away from the Democrats because they made an insufficient case for jobs. Rather they turned towards the Republicans because they promised to hit the pause button on demographic change.

Trump offered just such a retrograde vision. One where racial minorities could be jeered, women could be harassed, and LGBTI rights could be redacted from policy discourse altogether.

As a liberal I have wavered between these two narratives. Initially I felt strongly that economic dissatisfaction was the major driver for the ‘white flight’ to Trump. In an earlier post I wrote about the likely effect of rising income inequality in the United States on voter behaviour. However I have never felt that it was the only story to tell, nor considered that many of my fellow liberals would take that view.

In the past few weeks I have found myself growing more and more disturbed by proponents of the purist economic narrative, and their call for a wholesale rejection of policies that do not specifically frame the world as a struggle between labour and capital.

‘Identity politics,’ they claim, is the preserve of the urban elites, and of little relevance to the ordinary American who is barely managing to make ends meet. We should be doubling down on the real life-or-death issues affecting the working class.

The reality though is that a ‘class’ is just as much an identity as religion, race or gender. The shrinking demand for unskilled labour in traditional manufacturing industries has life-or-death consequences for some. The same can be said of the rise in hate crimes directed at Muslims, the disproportionate shootings of black suspects by police, and State interference with women’s reproductive rights.

Climate change moreover is a life-or-death issue of biblical proportions. One moreover, that disproportionately affects those with lower incomes, who are less likely to be insured, and more likely to be captive to geography.

With the passage of time comes the capacity for deep analysis. The public, the politicos and the pollsters have had a chance to analyse the campaign and voter sentiment in fine grained detail.

The final vote count which puts Clinton ahead of Trump at a count of over 3 million has dampened liberal panic to implement a knee-jerk solution.

We can see now that Hillary Clinton did not neglect the working class in favour of an ‘identity politics’ (ie ‘idpol’) agenda. A simple word frequency count of all her campaign speeches, in the primaries and the general races, indicates that economic concerns were at the centre of her campaign.

Researchers at The University of Massachusetts Amherst surveyed a random sample of voters on a range of issues including their attitudes to gender inequality, race relations and the state of the economy and a range of factors. They then used a binomial model to analyse the effect that these characteristics had on voting behaviour. This kind of model is useful because it allows us to consider simultaneously the effect that a range of factors have on voting Republican, and to separate out which factors had an effect, and to what extent.

The results of one of the models in the study, which included only white likely voters, are summarised in the table below.

Those factors that have a statistically significant on the likelihood of voting Republican are colored red. 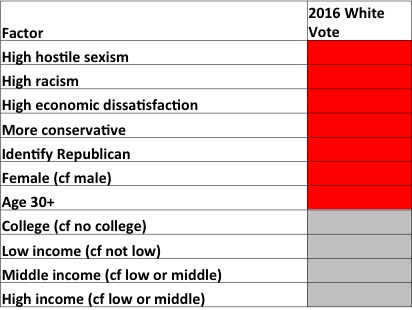 The above results show, somewhat predictably, that economic dissatisfaction, racism and sexism are all important ‘explanators.’

College education is not in and of itself an explanatory, once sexism, racism and economic situation are taken into account.

Also women in the study tended to vote Republican, and were not discouraged by the infamous ‘hot mic’ tapes. Go figure.

It is not just white voters that were motivated significantly by these three factors. The same model was run on a sample grouping of all races with similar results.

Each graph shows how much the likelihood of being a Trump voter increases for two people who are exactly the same, but for a shift in sentiment on one of the below scales: economic dissatisfaction, hostile sexism and acknowledgement of racism.

Figure 3: Predicted probability of voting for Trump based on values of economic dissatisfaction, racism, and sexism

Note: Predicted probabilities based on a variation of Model 1 which includes respondents of all races, while holding all other variables in model at their mean values. Vertical lines represent 95% confidence intervals.

Clearly the push-to-Trump factors of economic dissatisfaction, sexism and racism are not just a problem for non-college educated whites, but the voting population at large.

It also appears that Clinton was rejected, in large part, because of her gender. The effect of sexism was markedly more pronounced in 2016 than in the 2012 election.

Note: Predicted probabilities based on the models in Table 3 while holding all other variables in model at their mean values. Vertical lines represent 95% confidence intervals.

The reality that the Democrats lost the Presidential election, despite pitting the most qualified candidate imaginable up against a narcissistic clown, calls for serious self-reflection and greater understanding across constituencies.

The need for empathy for white voters experiencing loss of privilege, was expressed perfectly by outgoing President Barack Obama in his final address.

“For blacks and other minority groups, it means tying our own very real struggles for justice to the challenges that a lot of people in this country face — not only the refugee, or the immigrant, or the rural poor, or the transgender American, but also the middle-aged white guy who, from the outside, may seem like he’s got advantages, but has seen his world upended by economic and cultural and technological change. We have to pay attention, and listen.”

At the same time he warned against falling into the trap of reverting to the purely economic narrative tailored to the white worker:

“If every economic issue is framed as a struggle between a hardworking white middle class and an undeserving minority, then workers of all shades are going to be left fighting for scraps while the wealthy withdraw further into their private enclaves.”

A sustainable civil society cannot purport to leave anyone behind, either economically or socially. Recognising the effects of income inequality, and job insecurity on those without a college degree does not mean that we trash the idea that everyone – regardless of gender, race, religion, sexual orientation or health status – has a right to participation in public life.

As I write this article, the first steps to repealing the Affordable Care Act have been taken and Trump has revealed his pick for Attorney General, Senator Jeff Sessions, a Senator who is strongly anti-abortion and gay marriage but is good with torture.

It should be bleedingly obvious that this is not the time for small ‘l’ liberals to be fighting amongst themselves. There has been some truly excellent deep thought on how the Democrat Party can reconnect with its base, that does depend on a single narrative. It’s time to look at what constructive action can be taken to revitalise the left rather than searching for the enemy within.

One thought on “Left vs. Left: the Pitfalls of Hasty Conclusions”